Virtual forests are coming. New efficiency age is now coming to timber industry due to internet of things and telecommunication capabilities development. Current technologies ensure a sensitive approach to forest management. Entrepreneurs can track every tree and its specifics and plan the best way of utilizing timber well in advance. IoT substantially reduces costs and wastes of timber production and helps protecting forest assets.

Russia is one of the leaders in territories of woods. Timber resources are assessed at 83 billion cubic meters. All timber exporters claim the global demand is growing. But only those who can manage timber resources cleverly, i.e. through high technologies, may be successful.According to Ivan Kozlov, IT Director at Metsä Group Russia, it is now time for virtual forests. At the IT in Industry section of the TAdviser forum he told that currently a smartphone can be used to watch aerial survey of a forestland, to assess timber resources, to get an advice from an expert. In the same simple manner one can request services of bedding or cutting trees. But for the time being all that is only simple in the local area of the Finnish wood enterprise, Metsä Group.

Today, Metsäliitto Cooperative, the parent company is a cooperative of 104000 private forest owners and they have already appreciated the value of innovations.By mid-2017 digital instruments helped selling about 28% of the products of the concern, while the demand for the digital services in forests management was even higher. In Finland IT instruments help timber businesses address four main challenges, namely, to learn what is growing and where; what has been stored and when the stocks should be removed; what forest assets have been removed and how they were used. Developers expect to present a service of virtual forest plans. For that, two data collection technologies are now tested: drones with mounted cameras and laser equipped remotely piloted aircraft. As Juha Jumppanen, Metsä Group’s SVP, notes, in the future every tree in Finland will be digitalized and ecosystem participants will know its location, height, diameter, type and other parameters. Virtual reality application will allow visiting any forest remotely. So a forest owner will be able to inspect a forest without leaving a living room being at the same time advised by specialists on tending the trees and on anticipated profits.In 2015 Metsä made one of the first electronic timber trade transactions in the world. It now expands its electronic experience to the 26 countries of its presence.In Russia Metsä Group produces timber, harvesting it in Leningrad Region.

According to Ivan Kozlov, this territory will also be subject to monitoring via drones. At the moment resources are metered and valuated by sensors installed at special Harvest vehicles. One Harvest supersedes a logging crew with an onboard computer recording all its activities as well as timber species and logs characteristics. Since internet is not available in the woods of Leningrad Region, data may not be communicated online and is uploaded into the system on a weekly basis. As Ivan Kozlov notes, for the time being that is sufficient for activities planning. Logging trucks are equipped with GPS devices which allow to monitor timber loading, unloading and delivery.Such capabilities are unavailable in most forestry regions of Russia. Over the first six months of 2017, according to Ministry of Natural Resources and Environment’s data, damages caused by illegal harvesting exceeded RUR 4.5 billion ($ 77 million), but the real harm may be even greater. There is a number of reasons why Russian forest operators can not get full use of the expertise of the neighboring country.

“In Russia, the obstacle for implementing digital technologies in timber harvesting and in exploiting natural resources (forests, waters, minerals, wastes, pollutants discharge) in general is the unwillingness of the businesesses to become fully transparent and thus to fully pay the charges set by authorities”, Sergei Yakutseni, Geolexpertiza’s CEO, notes. “Such charges are calculated according to production outputs declared by mining and processing companies. But in parallel, there is a mechanism of corruption in operation allowing appropriation of the rent on natural resources by some private individuals. A digital plan of the allocated forests may be supervised via external means such as satellite monitoring”.

Internet technologies allow automatic computation of the cut timber volume which kills shadow dealings. Another obstacle for innovations is the patent law.

According to Elena Kuptsova, Chief of Patent Department at Guardium law and patent firm, “Under the Russian legislation the one who was the first to patent some technology, gets the priority right to use it. Other entities do not have such a right without a prior consent of the patent holder and may be prosecuted if they break the law. Acquiring a right to use a patented technology is often extremely expensive”.

One of the most acute challenges is protection of woodlands. Trees have two main enemies, humans and fires. Various methods are employed to limit illegal logging. In Brazilian jungle trees are equipped with tiny cellular communication modules. The device is developed by Cargo Track. It is hard to detect and can operate for a year without being recharged, regularly sending a signal to indicate its location. Once the system registers relocation of the device, it informs the immediate response center and respective agencies.

In Russia, a different system is employed, space monitoring of forest area alteration. It was first employed in 2015 in the Far Eastern Federal District. Kedr system was developed by WWF Russia on the basis of the CIToRUS platform. Automatic analysis of the Earth remote sensing data on the basis of satellite images reveals illegal tree chopping. The data is then processed and sent to mobile devices of forest rangers.

The initial tests of the space algorithm demonstrated 80% efficiency and 100% accuracy of Kedr detecting felling on an area of an average football field.

Wild fires in Russia annually cause damage of $1.8 billion. A Skolkovo Innovation Center resident DiSiCon from Nizhny Novgorod, has developed a forest monitoring and early warning system for forest fires, Lesnoy Dozor (Wood Watch). Lesnoy Dozor is a network of rotating thermal imagers and IP cameras installed on various towers, and software capable of detecting spots of smoke and fire within 30 kilometers. In order to reduce the load on communication lines, collected data is processed locally, at the smart monitoring points, and then fed into the system.

DiSiCon sees among its prospect customers forestry departments, national parks, Ministry of Emergencies, Ministry of Defense and forest leasers (accounting for 20% of all national forests). According to DiSiCon’s assessments, some 30,000 monitoring stations may be installed nationwide. The international market for Lesnoy Dozor is four times the size of the national one. Establishing presence in Russian market will be easier since Lesnoy Dozor is on the innovative equipment register and is thus recommended for broad implementation.

As representatives of Aerogeomatica note, two land surveyors can collect and put into the system information on 50 hectares of woods in a month. An airborne laser scanner can do it in a day. Mobile devices manufactured by Krasnodar-based AGM Systems, when taken to the air by, for example, dji600 hexacopter, generate high quality images of both the land surface and the biomass.A laser scanner can with a fair accuracy count the trees.

“If in addition to a scanner we install onto the vehicle a hyperspectral camera, we get information on the quality of the biomass, on the timber species and diseased trees. We will also see in every detail all illegal cuttings and areas devastated by various natural disasters”, Aerogeomatica’s Alexander Demchenko says.

In his view, mobile and airborne laser scanning idea has been actively advancing in Russia for some 15 years. The technology allows collecting data in three dimensions to then produce 3D object models. An AGM-MS7 scanner with distance gauge accuracy of 3 millimeters is priced at RUR 25 mio ($425 K). 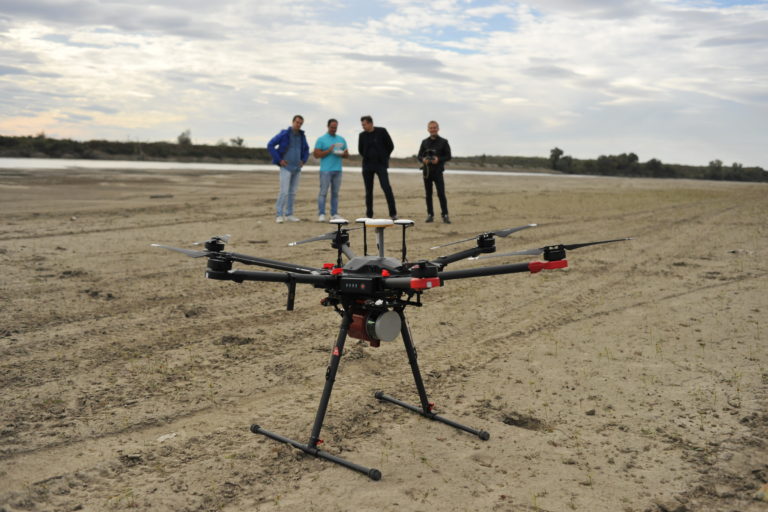 A less accurate version with distance gauge accuracy of 5 centimeters is RUR 5 mio.The technology is broadly applied in ground mapping, engineering survey, geodesics and architecture and certainly in forestry management. Its developers are confident that in the future laser scanning will be applied in archeology and criminal investigations, but they can not assess the scope of these prospect markets. Today, the major customers of Aerogeomatica are large Russian companies and regional executive authorities. The innovators think their commercial success is directly linked to construction industry and erection of large national and regional infrastructure facilities.

“If these sectors do well, then the demand for accurate data collection is growing”, Alexander Demchenko explains. “There are indirect indicators that professional demand for airborne laser scanning technology as means of data collection, is growing. We hope timber industry will appreciate the capacities of our mobile scanners as well”.