Dbrain which recently raised investment of $8 mio, disproves a stereotype belief that AI is always most sophisticated and expensive.

By employing that blockchain platform, any entrepreneur can teach a neural network to address his needs, be it pizzas’ quality check or oil prospecting. Dbrain helps bringing together IT specialists and people involved with machine learning which requires repeating a huge number of routing operations. By now, 20,000 labelers involved with the project Dbrain, have completed 3,000,000 tasks. Yet that is just the beginning.

For Dbrain authors, the starting point was realizing that B2B solutions in an AI sphere are implemented much easier than those intended for a specific customer. Business processes are more standard and can be analyzed without any special difficulties. Therefore making software for monitoring compliance with company regulations by a café staff is much simpler than designing an autopilot system for car driving. Yet such software, no matter how simple, requires customization to meet every client’s specific needs. Still, farms, supermarkets and other establishments are unable to implement AI technologies in their business processes all by themselves. For that, business owners lack adequate competences and professionals to label the data. Besides, hiring a Machine Learning specialist in Russia is expensive. A monthly salary of a data scientist starts at almost $3K. 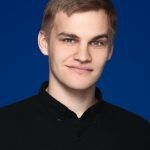 Alexey Hahunov is one of DBrain founders and he has learned from his personal experience that AI solutions in business can be most economically efficient. Hahunov started his way to AI from robotics. He graduated from Bauman Institute of Science and Technology in Moscow and worked for a company specializing in manufacturing industrial robots. Having gained some experience, Hahunov engaged in his own developments. He decided to have his family farm in Moscow Region computerized and launched R-Sept project which included robots for feeding and milking cows. Yet in practice mechanisms regularly made mistakes when placing milking clusters onto udder, since udder can not always be ideal, and every minor deviation resulted in a faulty operation. Hahunov therefore had to teach a neural network to properly find dugs. For that he used video recordings with every dug manually labeled, for the computer system to be able to repeat the actions. Later, he founded Сonnectome, a company specializing in implementing latest AI and video analytics developments in business processes.

DBrain offers any businessman to download raw data in the database. After that, labelers employed by the platform perform tasks which allow teaching a neural network. That can be voice recognition or reviewing pictures and identifying their content. Crowdworkers from all over the world label data at the platform and a special Telegram bot. They do not communicate with the customer. A labeled dataset is then passed onto developers for further analysis. Developers in turn design an operational algorithm.

For each business task, DBrain sets a tender for data scientists to compete in offering the best AI solution. Any professional can take part in it. A feature of the platform is a permanent protection of business data from leakage. Data scientists are provided with small datasets. One can review them, understand their structure and essence, yet they are not sufficient to design a practically operating algorithm. Data scientists write a code which will then teach a neural network at Dbrain servers where explicit dataset will be available, but the data will then be fully protected from hacking. At the end of the tender the most accurate model is identified which fits the set metrics in the best way. The outcome of a tender is an application capable of repeating simple actions only humans could perform before that. An AI developer is then chosen on a competitive basis.