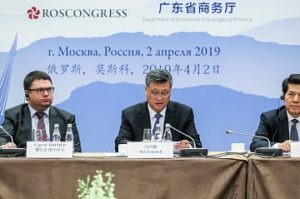 Guangdong is China’s leading province in the production of electronic, textile, food, pharmaceutical products and household appliances. The province accounts for more than 10% of China’s total GDP. Today, Russia and China are actively promoting cooperation in new areas, such as the development of the Russian Far East and the Arctic.

«We held this roundtable in order to implement a series of agreements between our countries’ leaders, and to mark the 70th anniversary of Russia—China relations. We are breaking records in trade and economy, transport links are improving. I personally took part in the Eastern Economic Forum; I saw Primorye Territory on my trip, and it made a great impression on me,» said Ma Xingrui, Governor of Guangdong.