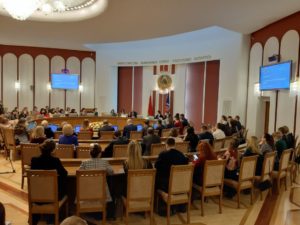 In early April, Central European Initiative’s Secretary General Roberto Antonione and a delegation of the CEI-Executive Secretariat, including Alternate Secretary General Antal Nikoletti and Deputy Secretary General Zoran Jovanovic visited Poland and Belarus, and had meetings with high government officials of the two countries, the website of the organization reports.

The main goal of the mission was to discuss the future strategic direction of the organization and further possibilities for enhancing cooperation in the framework of the CEI. Possibilities of an enhanced involvement of Poland and Belarus in the organization’s activities were also explored. In this context, the discussion touched upon the CEI activities and possible new developments in the areas of interest to both countries, as well as on the priorities of the Italian CEI Presidency 2019. Science and education were singled out as important topics to be pursued further.