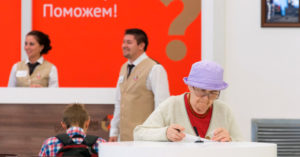 The number of pensioners in Moscow has reached three million, that is, every fourth Muscovite is a retiree, said Head of the Moscow Department of Labor and Social Protection Vladimir Petrosyan.

The city annually allocates RUR 300 bln ($4.6 bln) to provide pensions and social benefits. The average life expectancy in Moscow is 78 years. There are 430,000 people aged 80 years or older, with 712 aged 100 and older. Moscow’s population is ageing, Petrosyan said, and this trend will persist.

At the same time, Moscow provides women over 55 and men over 60 a 50% discount on utility payments and relieves them from property tax. Petrosyan said new employment centers will open for people aged 55 and older.

The ageing of the population means that we should expect a direct or indirect increase of taxes and a growing demand for workforce, which will lead to a further expansion of labor migration.

Moscowpension
Previous ArticleEnergy for largest mining centerNext ArticleFM: We are not opening our markets to be flooded with Chinese goods