On October 18, Moscow State University’s botanic garden (Apothecary Garden), and Rosbank presented one of the main environmental projects of the decade: the country’s first rainwater harvesting system for gardens and parks.

The unprecedented environmental project marks the 312th anniversary of the Apothecary Garden, Russia’s oldest botanical garden. It has become the country’s first botanical garden and park with its own rainwater collection system.

What does it look like? It is a modernized version of a classical rainwater harvesting system used in country houses: it transports rainwater through pipes or drains, filters it and storages it in tanks under the buildings for reuse, for instance for plant watering. 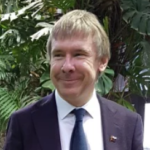 “The city is interested in using rainwater to water plants,” said Head of the Moscow Department for Environmental Management and Protection Anton Kulbachevsky. “It is a pilot project which should later be used all over the country. In terms of financing, it is an example of a successful public-private partnership in the implementation of a socially important initiative. I am sure that in the future this watering method will be used more often. The city is currently interested in making flat green roofs. Many new buildings will appear as part of the relocation program, and they will mostly have flat roofs with plants that need to be cared for.”