Stasis cryptoplatform designed by Russians Grigory Klumov and Anatoly Knyazev, has issued cryptoeuro (EURS) worth €12.2 mio. The cryptocurrency is backed by an equivalent amount in euro and makes it easy to acquire any cryptoassets in Malta. Grigory Klumov explained Invest Foresight all the details of the deal which is also described at Stasis’ webpage. 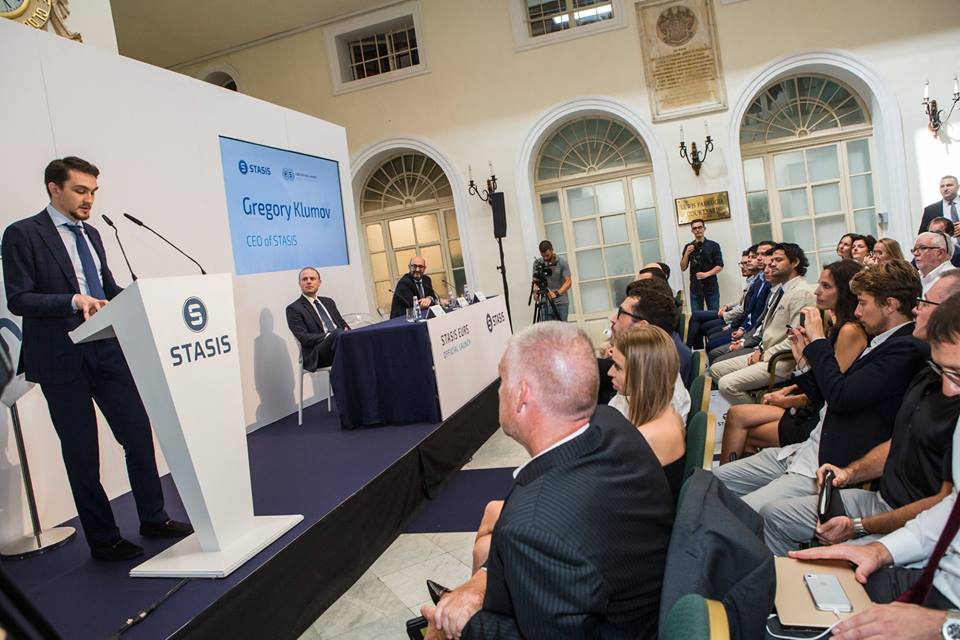 Cryptoeuro worth €12.2 mio was issued by STSS Malta Limited, a legal entity which owns Stasis platform. STSS Malta Limited was registered in May 2018 in Malta. Cryptoeuro belongs to the so called stablecoins, i.e. cryptoassets backed by a reserve of fiat currencies. Cryptoeuro’s full name by the way is EURS StableCoin. The new coins were sold at 1:1 rate (one cryptoeuro is worth one fiat euro). The 12-plus million euro raised by the issuer are not appropriated but placed as reserves. Every EURS is backed by €1. Stasis on a daily basis reports to its counterparts on the status of the reserve which besides is audited every quarter by one of the Big Four accounting firms (EY, PwC, Deloitte, KPMG).

The names of the purchasers of €12.2 mio worth EURS are not disclosed. It is known they are customers of Exante investment company. The papers on the deals were signed by Alexander Laptev, CEO at Exante.

“Our clients hold their accounts at Exante. That’s most convenient since we can transact without any banks’ mediation”, Grigory Klumov comments.

For Stasis, Exante is a key partner and its liquidity supplier. The investment company has its online operations at over 50 countries worldwide including the USA, Europe, Australia and Asia. Exante also manages BitcoinFund, world’s first hedge fund. Both entities were founded by Anatoly Knyazev in 2011-2012. In 2013 the fund was the most profitable hedge fund in the global history having ensured a record 4847% profitability due to the Bitcoin hike.

Grigory Klumov shared his plans of issuing EURS, back in December. The situation has changed since then. Malta has passed laws on legalizing cryptocurrencies circulation. Cryptoeuro was issued in conformity with those laws. By 2018 yearend, Stasis intends to bring its cryptoeuros issue up to €500 mio through a number of offerings.

What is the purpose of cryptoeuro? Its issuer believes it can become a convenient means of settlement when cryptoassets are acquired, especially in Malta where investment funds (and in some future, banks) are able to manage cryptoassets and cryptocurrencies. Conveniences are twofold. First, availability of reserves should theoretically stabilize cryptoeuro’s exchange rate thus making it different from highly volatile Bitcoins and Ethereums. Second, cryptoeuro settlements are fast and cheap. One can within seconds (which is much different from banks) make an EURS transfer for merely 50 cents to any location of the globe, and there is nobody who could put a transfer on hold since it’s a blockchain transfer.

“Once Stasis has a stable market position and is traded at large marketplaces, we will be able to use it as a hedge instrument”, Vladimir Smerkis, the Token Fund cofounder and partner, says.

It’s not as simple as that, though. There is no certainty that cryptoeuro can be a reliable means of paying for cryptoassets, as it solely depends on the readiness of cryptoassets’ sellers to accept the currency as a payment means. The currency is new and has not got any reputation. Fiat euro reserve could certainly raise liquidity and guarantee stability of cryptoeuro’s value, yet that can only happen if cryptoeuro is freely converted into fiat euro. Still, STSS Malta Limited has set the following restrictions: cryptoeuro can only be converted into fiat money by an actor who has accumulated ten or more million EURS. STSS Malta does not exchange any smaller amounts, hence for most prospect users of the new cryptocurrency an option of converting it into fiat money is unavailable. They should therefore hope cryptoeuro will have acceptable liquidity in the free market. At the moment, EURS are accepted at only six restaurants in Malta while their exchange for a fiat currency can only be done at a single ATM. Cryptoeuro can be purchased at London DSX cryptoexchange, HitBTC exchange, ePayments payment system, Exante. Stasiswallet can be downloaded at Appstore and GooglePlay.

The aggregate issue volume is for now limited by €12.2 mio, which brings about a suspicion that in theory the issuer could have taken some preventive measures which totally exclude a chance for any single actor to accumulate ten million cryptoeuro. To ensure that, the issuer will just need to accumulate some share of the issue under control of its affiliated entities. As for the transfer cost, it may over time be raised to 1% of a transfer amount.

It’s noteworthy, the issuer has not published a White Paper at all, claiming a cryptocurrency issue is not the same as attracting investments.

And finally, just as in case of any ICO, there hypothetically always exists a threat that at some point reserves can be appropriated by the issuer. Legally, that will not be an offence and no audit can prevent that. True, the new cryptocurrency’s issuer states that the fund’s board of directors is now being formed to include well known personalities who will become guarantors of the corporate management standards and the impossibility for the issuer to embezzle funds.

The launch of a new digital currency took place at the premises of Malta Chamber of Commerce, Enterprise and Industry on July 4, 2018 with Maltese Prime Minister Joseph Muscat announcing a new legislation on cryptocurrencies and blockchain passed by Malta’s Parliament. Malta has allowed ICOs having obligated every ICO project to disclose its financial data and publish its White Paper with detailed descriptions of all crowdfunding parameters.

It should be noted, EURS StableCoin is not the only stablecoin in the cryptocurrencies’ market. Prior to cryptoeuro, there was Tether (USDT) backed by USD. Tether was launched by Tether Ltd., registered by Bitfinex’s Giancarlo Devasini (CFO) and Philip Potter (CSO) back in 2014. Many major cryptocurrency exchanges such as Poloniex, Bittrex and Huobi, employ USDT as a substitute for the fiat dollar. Nevertheles, last year Paradise Papers’ journalistic investigation uncovered there was a collusion between Tether Ltd. and Bitfinex aimed at artificially pumping Bitcoin value through large-scale USDT tokens issue.

In May, Circle cryptocurrency startup supported by Bitmain, the major mining equipment manufacturer, announced issue of its own dollar token, USD-C. Circle has acquired Poloniex cryptoexchange, and the marketplace needs USD-C to abandon the compromised Tether (USDT).

By Natalia Kuznetsova and Konstantin Frumkin