Titanof is Russia’s first manufacturer of everlasting cleaning water filters which do not need replacement. The startup is expanding very fast. 4,500 filters have been sold after sales started 18 months ago for the aggregate amount of $1 mio while personal investments of the startup founders only amounted to RUR 200 ($3).

In many areas of Russia, tapwater is far from being perfect. It is often limewater with some additives such as chlorine and polyhexamethylene guanidine hydrochloride. In urban areas tapwater at times contains iron and other elements at concentrations far exceeding standard medical norms. Private housing owners also have problems since water in their wells is often rich in chlorine, ammonia, heavy metals, gases and even radioactive elements, let alone sand, clay and other coarse fractions. In either case, such water requires fine purification that until recently meant regular replacement of filter cartridges. 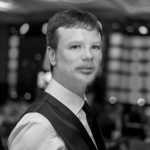 The idea of launching a business belongs to Alexei Shanaev, Titanof founder, when he saw an Internet ad on sale of titanium bars. The items were kept in an aged man’s garage. Shanaev was interested in the story of the unused filters and found out that Soviet engineers developed those filters back in the 1950-s for refining oil at warcraft on duty and ready to attack a potential adversary in the Cold War days.

The technology has been kept secret but now has found a peaceful application. After a number of tests, Shanaev was certain porous titanium can effectively refine other liquids apart from oil. Filters made of such titanium were mass consumption products, and exceptionally durable ones.

Due to its chemical properties, titanium acetifies iron contained in water. Besides, it is bactericidal. A filtering element is porous thus absorbing various metals and substances (manganese, free chlorine and other fine admixtures). Its filtering capacity is 0.8 micron. 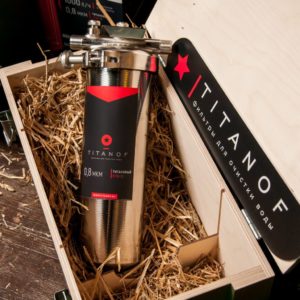 Titanium filters do not need replacement since their lifetime is over 50 years and in fact limitless. Elements made of a tough metal do not deplete or corrode over their operation period. That means that such a filter is installed once and for the entire life.

Most of the filters currently in the market require regular replacement of their cartridges. In practice that means consumers stop using them in some while, since a frequent cartridges replacement is costly and aggravating.

If a Titanof filter is soiled, there is no need to replace a cartridge. It will suffice placing its titanium bar into citric acid solution. Therefore despite their fairly high price of RUR 22K ($340) titanium filters are in a serious demand. The project broke even right away. Once launched, mass production was profitable three months later. Since the company does not use any dealer services, it can keep its prices reasonably low.

Titanof filters can be used by households and also at industrial facilities, social establishments, swimming pools, where improved quality of water is essential. The filters’ quality was verified by independent experts who took tests of water before and after refining and submitted their positive conclusions.

According to Alexei Shanaev, consumers also like an unusual look of the product which is much different from other similar products in the market. The filters are black, red and grey and styled a la USSR. The explanation for such an approach is the fact that many people believe Soviet product means durability and reliability.

Alexei Shanaev succeeded in promoting his project without having any experience of web promotion. Some time was spent on learning the basics of websites designing and contextually targeted advertizing. That helped optimizing budget at the initial stage of promotion.

The businessman admits, at the beginning it was hard to overcome consumers’ cautiousness. People did not believe in the product’s quality. They just could not imagine that large manufacturers were not offering anything like everlasting filters while a newcomer company brought them to the market.

To be able to answer any questions, Titanof team explored the entire water treatment market ranging from industrial units to home-made filters. That helped getting expertise and being able to professionally advise any customer. Besides, the products were properly certified, test protocols obtained and attested. Commercials vividly explaining filters’ functioning, and comments by the first buyers helped making advertizing arguments most convincing. Another key to success was inviting Anatoly Wasserman, a well known intellectual and a great authority for many people, as a brand ambassador.

The next challenge was business expansion. A team of two people made the business profitable and received some marketing and business awards such as Effie Awards 2018 and Ecobest Awards 2018, and by 2018 it had every reason to expand its staff. Titanof is most selective in hiring. All new employees especially those who personally answer clients’ questions, have to get a proper training, learn products specifics and water treatment intricacies. Despite a staff growth, company CEO is still involved with every process and personally monitors the consumer orders dynamics.

To satisfy the needs of the customers who for whatever reason can not use titanium filters, the company came up with a broader variety of products having added other water treatment systems and water deionizers. The quality of Titanof’s products was acknowledged at the exhibition of Leroy Merlin suppliers, and this August Titanof will start deliveries to the Leroy Merlin stores. The other plans of the company are establishing its presence in the markets of the CIS countries and reaching a turnover of $15 mio.