Russia’s Brain Beat has made it to the top three of the Asian Entrepreneurship Award (AEA) 2018 in Japan. 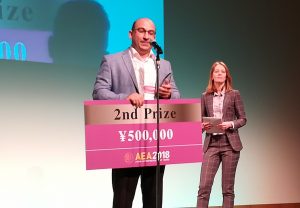 A team of Russian developers led by Brain Beat CEO Edward Kryzhanovsky brought their breakthrough non-invasive blood glucose meter to the prestigious innovation competition. The technology, which is likely to revolutionize the market for monitoring and diagnosing diabetes, is based on optical spectroscopy and therefore does not require puncturing the skin to control glucose levels.

“Frequent piercing of the finger pads has a lot of disadvantages: pain, damaged skin, decrease in sensitivity at the puncture area, and a risk of infection,” Kryzhanovsky explained.

The Russian company took second place, being literally one hundredth of a point behind the winner. As the silver medalist, Brain Beat will receive a cash award of 500K yen ($4.3K) and two years of free use of three workplaces at a coworking area in Tokyo. However, according to Kryzhanovsky, the chance to speak in front of Japanese corporations was a much more important result. Several large Japanese manufacturers of medical equipment became interested in the non-invasive blood glucose meter from Russia.