Integration of the physical world and cyberspace, absolute production robotization, safe and environmentally friendly innovations based on Big Data, Artificial Intelligence and augmented reality make up just a small portion of the future Super Smart Society, or Society 5.0 which is going to replace Information Society 4.0 where technologies do advance but are not always used for addressing specific social matters. The concept of the socio-economic formats succession was developed in Japan in 2016 through the efforts of Japanese government and Keidanren Japan Business Federation. The Society 5.0 development rate depends on the businesses and authorities. Its creation is Russia may be supported by Japan’s Mitsubishi Electric which offers solutions for transforming industrial and business processes in line with the new challenges, the e-F@ctory platform, for instance, for production facilities. Noritsugu Uemura, Corporate Executive, Government and External Relation Division Senior General Manager at Mitsubishi Electric Corporation, shared his views with Invest Foresight on Russia’s readiness for new challenges. 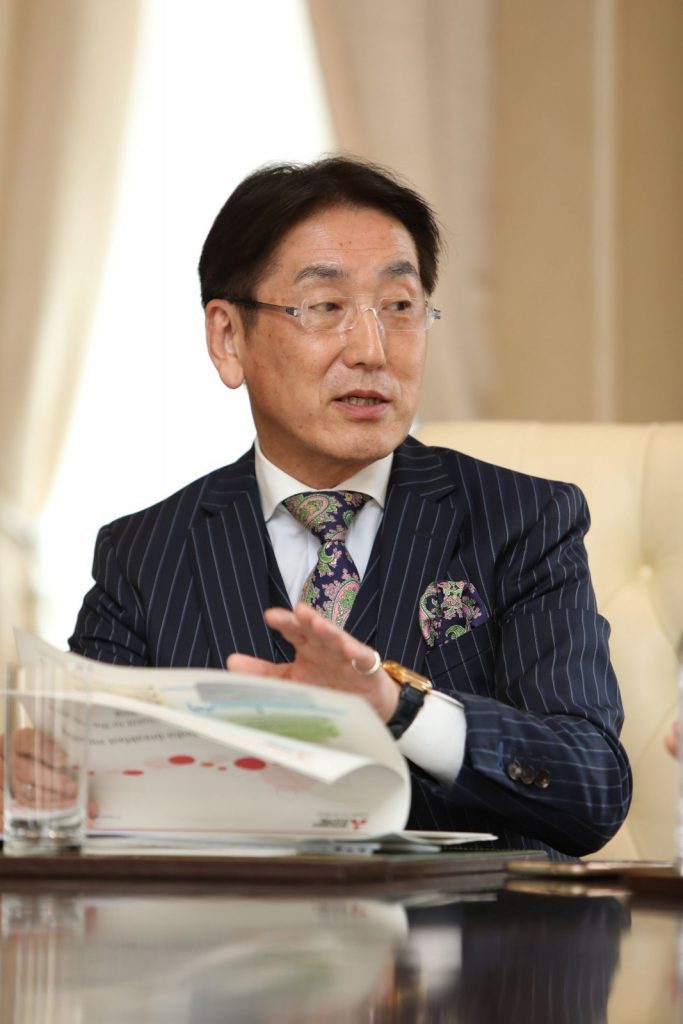 – Mr Uemura, could you please explain in detail the Society 5.0 concept?

– When referring to Society 5.0, we first of all mean shaping a new economic growth model for any country. It is also about employing technologies for resolving social problems. Generally speaking, it is about building a better future. First, people lived in Society 1.0, or Hunting Society, where predominant technologies were arrows and bows. Society 2.0 was Agrarian Society, while Society 3.0’s development was linked to the invention of electricity, steam engine, and, ultimately, mass industrial production. We now live in Society 4.0, or Information Society and can observe, among other things, industry digitalization. Society 5.0 is the society of the future where digitalization comes to every sector including medicine, logistics, agriculture and energy. People will use Big Data everywhere. AI and IoT technologies will be commonplace. Social arrangements will be smart and intellectual.

– When referring to Russia, which society does it live in?

– Even in Japan, some social groups are still in Society 3.0, yet most of the people do live in Society 4.0 and its realities. A similar situation takes place in Russia. That is typical for virtually every country. At the moment, many states have started moving toward Society 5.0, yet in Japan the concept is being implementedв already. In Russia, the process is not advancing very actively, still, it is underway.

– In terms of technology development, what countries can Russia be compared to?

– Speaking about economy in general and industry in particular, Russia is a bit behind in implementing the latest technology trends. After the USSR collapsed, there just was no possibility to invest in technologies development. Nevertheless, over the past ten years Russian government has made intensive efforts to catch up with technologies development and expand their funding. The overall economic structure is overdependent on export of mineral resources, though. Yet I should note a high degree of the space industry development where your country remains a recognized industry leader. If comparing Russia’s national technology development to European economies, Italy or Spain may be the right examples, I think.

– In what other industries Russia is ahead of other countries?

– In my opinion, it is cybersecurity. Kaspersky is a brand known worldwide and is a leading company specializing in cybersecurity. Russia has always been known for its fundamental IT developments.

– What are the obstacles for the global Society 5.0 development?

– The main thing is its acceptance by ordinary people. In Japan, both authorities and industrialists realize that Society 5.0 is an inevitable future. Yet, even in Japan Society 5.0 Strategy is still seen more as just another government initiative. The government makes efforts to make people aware of the fact the strategy is to their benefit too. At 2017 St Petersburg International Economic Forum president Putin stated that Russia’s economy must become digital. In fact, that is the same thing as Society 5.0. I believe that from the viewpoint of the future, the president’s decision to direct national development towards digital economy is absolutely correct.

– What advantages will common people get from Society 5.0?

– Since the concept was conceived in Japan, we have been engaged a lot with its advancement. Over the past two years, the understanding of Society 5.0 has become better, yet many people do not fully comprehend it. But there are important bonuses the future society can give people, in food consumption and medicine, for example. Or a possibility to use unmanned means of transportation.

– What companies have started implementing some elements of the Society 5.0 concept in Russia or elsewhere?

– In Japan, it is Fanuc Corporation which manufactures machinery for industrial robotization, or MORI SEIKI specializing in machine tools production. In their production, they actively use IoT technology. Mitsubishi Electric is certainly among such companies as well. In Russia and CIS we actively work with our partners who produce localized solutions based on our technologies. In Belarus, for instance, our partner Technikon has designed AQUATORIA solution for smart water supply systems. In Kazakhstan, industrial enterprises automation is employed by Arcelor Mittal. In Russia, such solutions are implemented, for example, at KEMZ Kovrov Electromechanical Plant.

– Will there be any room in Society 5.0 for the blockchain technology?

– It is evident, blockchain technology is certainly part of the future Society 5.0. Blockchain is first of all a cheaper way of creating a reliable security system in cyberspace. In Society 5.0 cybersecurity will be a key factor. The technology will be most useful for ensuring cybersecurity.

– How can authorities support the Society 5.0 development?

– The state’s support is much required. In Japan, government has even got a special budget for developing Society 5.0. Taxation mechanisms of stimulating shift to Society 5.0 are most important. In Japan, for instance, if a company invests in digitalization, IoT, Big Data collection and processing, which are all components of Society 5.0, it is eligible for tax deductions. Having invested $5 mio in that, one can reduce one’s tax base by 30%.

– That will very much depend on the position of the authorities. President Putin has clearly indicated Russia’s economy must become digital. Last year, at the annual Innoprom exhibition in Ekaterinburg, Economic Development Ministry’s representatives were most attentive towards the Society 5.0 concept presented by our company. This year, a governmental delegation visited our facilities in Nagoya where our e-F@ctory platform was presented. We hope the impulse set by president Vladimir Putin should bring results.