Russia and China plan to build a transportation and infrastructure corridor via Mongolia. That should be done within the ambitious large-scale Chinese project, Belt and Road. Mongolia’s investments in the project will evidently be at the minimal level, while Russia and China will become the main investors. Mongolia will thus get a unique chance to modernize its transportation infrastructure. 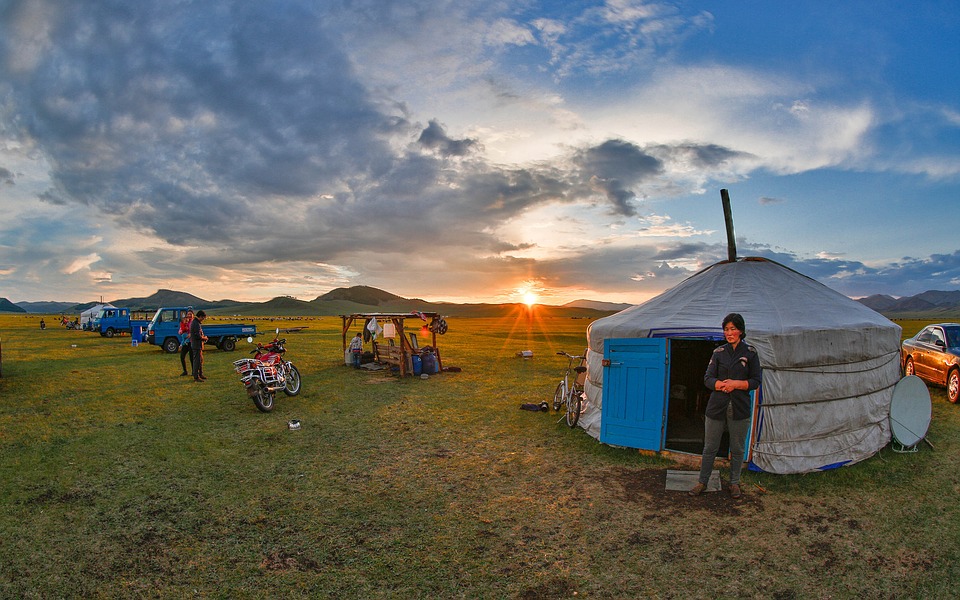 Russia is known for having two insolvable problems, stupid people and bad roads. It’s hard to say if there are any stupid people in Mongolia, but roads there are either non-existent or appalling. Due to low population density, roads network is underdeveloped. It is therefore no wonder, Mongolian government was excited about the investment project.

Motorways in the country are not bad, but hopeless. There are merely three paved motorway. Unsurfaced roads’ length is over 40,000 kilometers. The main motorway runs from the Russian border to Sukhe Bator and then to Ulan Bator, and has two lanes each way. The three paved roads are also toll roads. The Millennium Road government project aims to build paved roads among ten aimaks where most of the population resides. But the state budget will only suffice to finance construction of 200 kilometers of paved roads a year, hence the project will only be accomplished in ten years’ time. Yet, given the Chinese-Russian transport corridor project, there may be other option. It may at least be expected that the roads passing via Ulan Bator may be improved.

The situation with the railroads is slightly better in Mongolia than with the motorways, since there are two railroads crossing the country. Their length is 2,000 kilometers. Evidently, the USSR, when developing transportation infrastructure of its ally, was guided by purely pragmatic reasons, i.e. by advantages of transporting mineral resources by railroads and not by trucks. But due to the increase in cargo deliveries to China and Russia (which doubled over the past five years), the current capacities of the local railroads can no longer meet the demand. Therefore a few investment projects intended to modernize railroads network were developed. At the moment, Mongolia’s authorities and businesses are much more successful in investing in railroads than in motorways. In Ulan Bator, the local administration miraculously put into reality an initiative of developing a municipal railroad on the basis of the capacities of the Transmongolian Railroad passing through the national capital. The municipal road only has a few stations which is evidently not enough for a relatively big city like Ulan Bator, but the project is in operation. In addition, Japanese investments were used to launch light metro, which is also based on the section of the railroad passing through Ulan Bator. As for the projects on developing long-distance railroads or motorways, they are all on paper and can not move any further. Nevertheless, the targets of such projects are surprisingly ambitious. One of the projects, for instance, suggests renting some sea ports from China to thus make the inland Mongolia a maritime nation. By the way, some ships already navigate under the Mongolian flag.

For Russia, the project will mean a further investment ingression into Mongolia. Besides, it will also mean attracting investments to the areas along Mongolian border, such as Amur Region which is very heavily subsidized by the federal government. By developing the transportation corridor, Russia may expect greater meat imports from Mongolia and, in turn, greater exports of Russian mineral resources. It should be noted that Ulan Bator Railroad is a joint Russian-Mongolian venture where Russian Railroads holds a share. Most executives of that Mongolian railroad are Russian nationals so it is quite natural that the railroad transportation corridor modernization will be financed by Russia and not by China.

The funding has in fact started. In 2017, Russian Railroads performed some works to upgrade infrastructure of Ulan Bator Railroad. At Olonovo station, for example, a terminal was built for handling bulk cargos. Additional locomotives were supplied and hence deliveries of exported coal doubled. Besides, Darhan and Dzamyn Uud stations were upgraded and 50 kilometers of new rails were laid. Subsequently, in January-March of 2018, freight-handling at Ulan Bator Railroad went up by 23.3% against the first quarter of the year earlier while the cargo turnover grew by 37.7 %.

Both Russia and China see benefits in expanding transportation options which will subsequently stimulate further mineral resources extraction. All in all, Mongolia has 15 proved deposits of gold, copper and coal. In the years of the USSR, most of them were used one way or another, while currently only Oyu Tolgoi copper/gold mine is being exploited. A possibility of international investments in Tavan Tolgoi coal deposit is being considered at the moment. In this case, China will be the main investor since Chinese big business has been eyeing the deposit since long, even though earlier in the decade, its development was of interest to Oleg Deripaska’s En+ Group and Victor Vekselberg’s Renova consortium. The aggregate investments can make up some $4 bln. Most of the deposit has been handed over to China’s Shenhua Energy, while the rest will be controlled by Peabody Energy from the US. There are some Russian investors who could take part in the project. Their interest is the railroad and infrastructure portion of it. A consortium has been set to include Russian Railroads, Japanese and Korean companies. A share in the project was also claimed by Kirsan Ilyumzhinov’s Eurasia Finance Investment Fund. Ultimately, the railroads will be constructed by the Russian Railroads and Mongolia’s Erdenes Tavan Tolgoi. In November last year, English language media reported that Russian participants of the project intend to finish the paved roads construction by mid-2018. The matter is though, that Russian Railroads does not build any motorways and the construction of the paved roads to Tavan Tolgoi is the responsibility of the Mongolian companies. Therefore, either foreign media know better, as they always do, than the Russian and Mongolian ones, or the whole story is much different.

Prior to that, in June, Australia’s Aspire Mining, registered specifically to operate in Mongolia and owning the largest Mongolian company engaged in coking coal extraction, signed an agreement with the government company, China Gezhouba Group Company (CGGC) on building 548 kilometers long Erdenet- Ovoot railroad. The railroad is to link Ovoot coal mine developed by Aspire Mining (Tsetserleg somon, Khövsgöl aimak in the north-west of Mongolia) with Erdenet, the second largest city of Mongolia, which is already connected by a railroad to Darhan, a major transportation hub at the Transmongolian Railroad. This railroad is the northern part of the transport corridor project. The railroad transport corridor in planned to be launched substantially later that the motorway corridor, in 2022. The overall funding of the railroad corridor is around $ 1.25 bln.

A logistics center at Zamyn-Üüd free trade zone (the largest border check point at the border with China) is actually ready by now. Its construction was financed by Asian Development Bank. The center includes some sections of the railroad (broad and narrow wheel tracks), a motorway, water pipes, power stations. The general contractor for the project is China Railway 21st Bureau owned by Korea’s Suson LLC, the customer is Mongolia’s government. It is anticipated that by 2019 the logistics center will be able to annually receive six million tons of transit cargoes. Since 2006, the European Bank for Reconstruction and Development has invested €1.4 bln in 80 projects in Mongolia. It does not stay aside of the logistics projects for the Russia-Mongolia-China corridor. In the middle of 2017 the bank invested $7.6 mio in Terra Express, Mongolia’s largest company for mineral resources logistics.

For China, the corridor in Mongolia is a part of the transportation project, Belt and Road, which includes restoring the Great Silk Way and building the Steppe Route transport corridor. The advantages for Russia have been described above. As for Mongolia, that is a chance to really reach out to the group of countries which is customarily referred to as developing markets. Mongolia may not be capable of becoming a new Asian Tiger, due to being underpopulated. But it could certainly follow the path of Kazakhstan. Their similarities include low population density, severe harsh continental climate with very hot summers and very cold winters, availability of huge natural resources (sufficient to support relatively small population). So far though, the skyscrapers build by Chinese companies to house corporate offices in the center of Ulan Bator, neighbor on meager tipi areas. As a matter of fact, Mongolia has everything to become the second Kazakhstan. It only lacks one, but a most essential thing, the transportation infrastructure. In Kazakhstan, following Stalin’s deportations of the population, a tremendous inflow of highly qualified ‘enemies’ was observed. To put it plain, they developed the entire infrastructure of that Soviet Republic and trained the local professionals whose fathers remembered roving life. By its social structure, Mongolia finds itself at a stage when one third of its populations still lives in tipis while in Ulan Bator, skyscrapers and metro are being built.